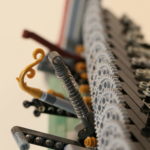 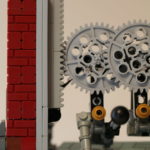 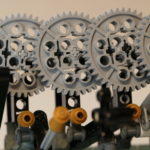 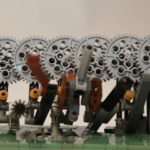 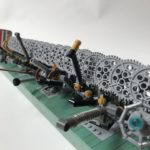 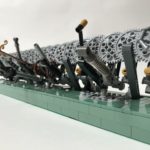 Gearing Up For Exponential Calculus

If you are looking for maximum deceleration, this is your piece of choice. Here, things move more slowly every turn, not faster. Here, every small cog in the machine does its part to slow things down. Although that happens really fast. We give you – the Infinity Clock.

Each big gear is connected to the next one via a smaller gear sitting on the same axle. The small gear drives the big gear on the next axle and so on. The big gears have 40 teeth, the small ones 8 of them. There are 20 gears. Let us assume that the initial big wheel does one revolution once every five seconds (the clock comes with a motor and battery, but there is a crankshaft for manual turning as well). The final wheel is mounted in a fixed position using a toothed rail (in the real-life example in Gießen, Germany, it is even half cemented into the ceiling), so it cannot move. What sounds like a dry math job at first becomes really intriguing once you really start looking at it (pun intended). If you want to see the tenth big ear even start to move, reserve an afternoon, for this takes three hours. If you want to see gear no. 12 in action, you need a three-day weekend. In the time needed for no. 15 to start moving, you will have celebrated another birthday (or at least have had the opportunity to do so).

As mentioned, the teeth of the last big gear interlock with a toothed rail which cannot move. This is what trips up most people, for how can a machine move whose last piece cannot? But fear not, for neither you or me will ever see anything jamming or breaking. Because:

SPOILER!!! Now for all you lovers of exponential math (finally!): The 20th and final gear takes 3 million years for one full turn. If you’re in a hurry and can live with seeing just the first tooth move, you will be rewarded for your patience in a mere 75,000 years.

This study on the infinity clock has been inspired by the infinity machine which greets visitors of the mathematics museum in Gießen, Germany (report in the local newspaper – sorry, available in German only). Compared to the original, the Lego® version presented here is a nervous greyhound. The infinity machine next to the museum’s box office puts its 26 gears in motion at an initial speed of 10 revolutions per second. The reduction ratio is 10:1 (as opposed to only 5:1 in the Lego version). These three quantities, all manageable by themselves, work together to create a result that escapes any effort at managing it: According to Prof. Alfred Beutelsbacher, director of the “hands-on mathematics museum”, the final gear takes two sextillion years (sic) to move by even one millimeter. This equals 500.000 times the assumed age of the earth (roughly 4 billion years), or, in everyday language, the current projected time for the Brexit to become effective, or 785,591,501,375,752 episodes of The Big Bang Theory.*

Puns or not, hands-on illustration or terrifying prospect, the whole thing exists beyond the reach of the human mind. Yet it is within your grasp!

The machine is not for sale, but has been spotted at public Lego exhibitions since 2018.

*if you re-compute this to me, I’ll buy you a beer.