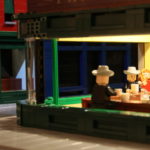 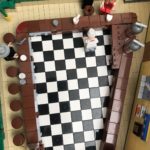 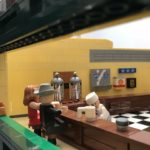 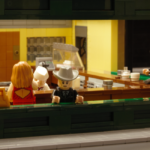 A tribute to Edward Hopper's "Nighthawks"

The Brickhawks are available at amazon and etsy as a premium art print in A1 format:

The Nighthawks as a Lego® installation

Edward Hopper’s Nighthawks have been enjoying their late night coffee for many years, and have captivated viewers by Edward Hopper’s almost magic use of light. They have been quoted in pop culture in a thousand ways, including a stint with the Simpons, being transposed into science fiction, and adopted by Banksy. A masterpiece of neo-realism, this classic painting continues to be one of the most popular art prints. As a lover of both Edward Hopper and Lego®, I felt truly compelled to pay the Nighthawks a hommage in Lego.

The goal was to fully translate the painting into a Lego installation. The building in the foreground, the diner inside, the roads, and the buildings in the background have been designed and built completely in Lego. After making sure that all the angles and perspectives come as close as possible to the ones in the painting, various light sources have been put in place to complete the scene with the exact same lighting, reflection, and effects which Hopper chose.
The entire scene consists of standard Lego elements, with only two exceptions. For the famous “Phillies” advertising banner on the building facade, a sticker has been specially produced, and the bodies of the coffee percolators consists of special chrome-plated elements from a shop specializing in customizing Lego elements.

Light and lighting are the essence of Hopper’s painting. Notice that while there are reflections on the left edge of the glass front, where it bends, there is not a single speck or reflection in the viewer’s vista into and though the diner to the buildings on the other side. To render this effect, two techniques have been used, one being more obvious and the other a bit more subtle. For the fully transparent view through the front glass window, the transparent Lego pieces have, quite simply, been omitted except for the rounded corner. But of course the diner does have a window, and that can be seen by the window’s light absorption – the buildings in the background, their light travelling through two glass panes, appear darker and with less contrast. This has been rendered by modelling the visible brick background building on the left in the full original detail and building the other facades with less detail and in a color combination with a lot less contrast (black and dark blue).

Contact us if you are interested in a Lego version of your favorite painting!
We will be happy to check out if and how your original can be rendered as a Lego® installation, and will submit an offer to you.