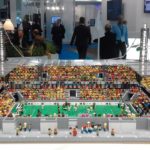 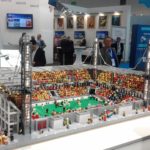 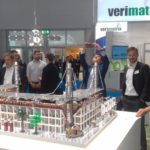 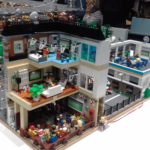 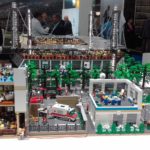 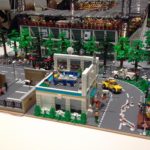 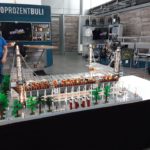 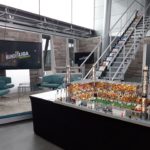 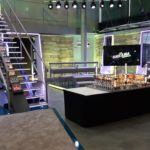 A model by Bricking Bavaria

This soccer stadium was built in 2018 by Bavarian LEGO® fan club Bricking Bavaria. HD+ and mx1 commissioned a replica of Cologne’s RheinEnergie stadium (formerly Müngersdorfer Stadion) for their booth at the communications tech fair AngaCom in the spring of 2018. The project team consisted of Frank Engel (project lead and design of the stadium proper), Jakob Hetkämper (construction and delivery) und Ingo Höltzig of 8millimeter.de (Outside facilities, city scene, TV satellite, and branding; all from Munich, Germany).

The model renders the original’s design in stunning ways, and also includes a host of unique features. The four lattice towers, which support the delicate glass roof structure, are illuminated, as they are in the original. The roof consists almost entirely of transparent pieces and thus comes very close to the levitating appearance of the original. Countless minifigure scenes inside the stadium and in the surrounding city scene captivated the fair visitors. These included allusions to soccer rivalries (look closely for the incarcerated rival fan!) and elements for local color such as bus stops in the Cologne color scheme. The model truly succeeded in its role as an eyecatcher and icebreaker. According to the manager who was responsible for the fair booth, beverage consumption on the company’s booth was three times higher than it was the previous year!

According to the customer’s service portfolio, the installation was to represent the viewing experience of a sporting event which is being broadcast. A broadcast van, an exact replica of the original (great job, Frank!), is parked besides the stadium, and sends its signal to the satellite soaring overhead. The satellite is modelled on the real Astra 1KR, and in turn transmits the signal to the city below. In the city, viewers in a sports bar, in a family living room and in a bachelor’s apartment are enjoying a shared viewing experience in perfect HD quality – if not the demise of the 1. FC Cologne soccer club. The match itself is fought between the sister companies HD+ and mx1, specially printed stickers for the jerseys included.

Even at first glance, the model makes a lasting impression due to the spectacular roof construction and the detailed rendering of the support structures. And if you give it a second look or more, you’ll be rewarded by the host of funny little scenes on the stands, the yard outside, and in the city and its buildings and interiors. More than 700 minifigures have gathered here to create a fun experience. Be it the meeting room, the janitor’s closet, or the rioting fans in the stadium – there’s everything here which also makes you smile or wonder in real life.

The installation measures 2 x 1 meters and featured prominently again at the SporTel fair in Monaco in the fall of 2018. In late spring of 2019, it could also be seen on RTL Nitro, where it served as a backdrop and talking piece for the season final of the soccer show 100% Bundesliga Live. The model was auctioned during German TV channel RTL’s charity campaign in November 2019.

With which model yould you like to captivate your audience?

This stadium can only give a first idea of how creative design techniques and the now available wide range of Lego® elements can come together to shape unforgettable installations. Together, building skills and the great variety of delicate elements also allow rendering very different textures and materials in a stunningly realistic fashion – be it shingles, wall plaster, brick or stone, or wood, or steel, or glass. The landmarks of your city, your organization’s headquarter or new campus, the historical places of your region, or the futuristic sports arenas or museums and exhibition halls of the 20th and 21st centuries – buildings and structures of any style and era can be turned into a fascinating Lego model.

Be inspired! We are looking foward to exploring the options together with you.