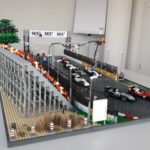 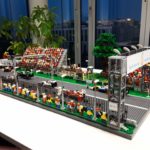 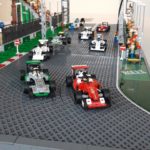 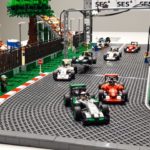 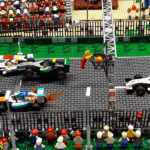 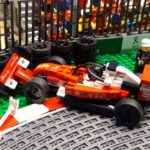 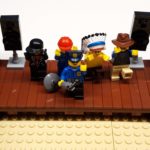 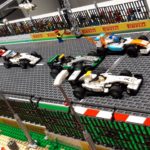 Racing dynamics on and off the track

8millimeter.de has partnered with JH Events / Jakob Hetkämper to build an action-packed Formula 1 racing scene for satellite operator SES’ booth at the 2019 SporTel fair. In the centerpiece of the installation, the leading cars are fighting for the best position to tackle the first curve after the start/finish line. The diorama is completed by fully-packed audience stands, extra details to add flavor such as lampposts and advertising banners, and countless minifigure scenes. Key to the dynamic look of the scene is the specially designed und built track. After several rounds of testing and prototyping, the backside of the 1 x 2 plate was chosen as the piece which would best represent the grainy texture of the track surface. 4,000 of them have been combined to create a matte, textured road top. To add extra realism, the road arches slightly towads the center, as do real roads. The track is thus rendered in a depth and texture which would not have been possible with tiles or bricks placed sidwards. The premium piece is the curve, which has been rendered in the same technique, and with perfectly smooth and vent shoulder stripes. As a interactive special for the visitors, a launch device has been added. Card are clipped at their back to a holding device, and when the launch lever is pushed down, they are propelled onto the track. Visitors could thus battle one-on-one for the best start.
The installation includes some standard models offered by the LEGO group. The launch device mentioned above is baed on the one included in the set 75911 “McLaren Mercedes Pit Stop”, from which also the basic design of most of the cars is taken. Other car designs have been adapted from the sets 75883 “Mercedes AMG PETRONAS Formula 1 Team” und 75879 “Scuderia Ferrari SF-H”. 8millimeter.de has remodeled all cars to include a halo, so they would more realistically the real season 2019 cars. Stickers have been specially produced for a custom 8millimter team and for a fictitious SES team. Stickers have also been specially produced to place SES advertising on the banners, as well as real-life Formula 1 sponsors, the perfect combination of brand promotion and delivering a real-life impression.

Like all 8millimeter.de models, this diorama also includes a host of standard and optionally deployable minifigure and extra scenes. If only a few of these are used, the installation is less crowded, and its dynamic and realistic layout come into focus. If it’s sprinkled with more funny litlle scenes, viewers and visitors have something new discover with every look or visit. Such goodies include a constuction site in the middle of the road, a vintage car battling for position (LEGO set 7682 “Shanghai Chase”), a Village People concert, or a car smoking trail, to name just a few.

The installation is 1.5 meters long by .75 meters wide (4,6′ x 2,5′). It is divided into 6 segments for easy transpartation and handling. It is a good example for the considerations reagarding size and scal, which are the strating point for any good model. At the outset of the project, options to build an entire track, or a bigger section of a course. These considerations were discarded in the process, though, because if the cars were to have any detail, the track would need a certain absolute minimum width. If this discussion about ration had noit taken place, the cars may have ended up far too wide and big in comparison to the track. This would have destroyed any claim to deliver a realistic diorama. The track in the end, was designed and built in such a way that it is about 5 times wider than the cars. The model thus retains a realistic look, and because the track and cars are done in minifigure scale, at the same time its components, such as audience stands and landscape, feature the popular classic Lego look.

We are looking forward to discussing with you how you can best present your sports facility or event as a Lego model. Get started now, and send us your ideas via our contact form. Of course, please also feel free to give us a call to discuss any other initial questions you may have: +49 (176) 6984 5733.

Let us know which sports or sports facility you would like to present as a Lego® model. A range of options is available for such installations: In one model the focus may be on the charme of a scenery bustling with minifugzre scenes. A model of an olympic stadium, on the other hand, will be built to capture the beauty and spectacular design of the structure, and will thus first of all aim to represent the proportiond and character of the chosen original. And of course, it can be the type of sport itself that is at the center – then the challenge will be capture its specific movement and dynamics.

Besides the classic spectator sports, innumerable other sports can be rendered as a creative model. How about a swimming competition? A beach volleyball tournament? A landscape diorama of a Tour de France leg? Or one of the big tennis tournaments? Or a golf scenery? A stadium will always be an eyecatcher due to its sheer size – but rendering a sports in Lego which is exercised on different and more natural surfaces such as sand, water, the mountains or the countryside has a very spcial appeal too! Over the last decades, new parts and new colors, and new combinations of them have become available so that landscape and water can be done a lot more realistically and beautiful now.