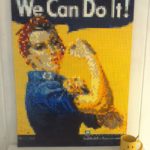 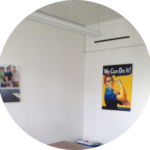 Rosie The Riveter is one of the most popular cultural icons of the 20th century. Originally conceived by J. Howard Miller for Westinghouse in 1941, Rosie was soon adopted by the US government. She was made the poster girl for the working woman, a hardworking heroine sounding a call to women across the nation to join the workforce and thus contribute to America’s war effort. Among those who heard her call was a certain Norma Jean Dougherty, née Baker. Norma Jean was discovered as a model in 1945 while working in a airplane manufacturing plant, and then went on to write her own history as Marylin Monroe.

Rosie has shed her wartime mantle, and has been given new roles as she was appropriated by later pop culture artifacts. The piece shown here was to make her present on one more medium alongside coffee mugs and posters: in Lego®, which is but a few years younger than herself. The mosaic is 128 studs wide by 96 studs high, which translates into a handy 77 x 102cms (30.3″ x 42.5″).

Interested in a mosaic of your favorite image? Just send us the image via our contact form, and we’ll be in touch with you immediately to let you know our suggestions.

If you are planning to purchase or create a Lego® mosaic, keep in mind that some motives lend themselves better to the 8 millimter resolution than others.

A few tips for choosing a motive